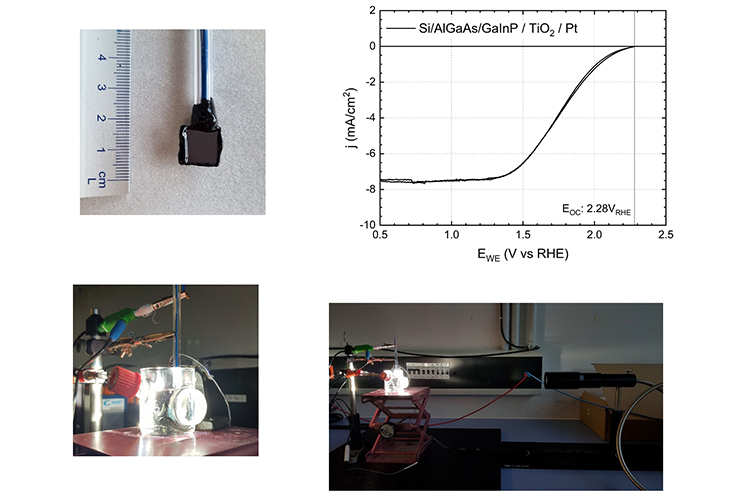 Figure: Pictures of the experimental set-up and measurement of the IV characteristic curve in the electrolyte

On the way to efficient direct solar hydrogen production, the first photoelectrodes were manufactured and tested under operating conditions as part of the H2Demo project. The fabricated photocathode consists of a GaInP/AlGaAs/Si triple absorber structure grown at the Fraunhofer Institute for Solar Energy Systems and an ultra-thin conformal TiO2 protective layer synthesised by atomic layer deposition at the Technical University of Munich. To improve the catalytic activity for the hydrogen evolution reaction, and thus increase the efficiency of the photoelectrode, a platinum catalyst layer was also sputtered on. In this design, the applied TiO2 protective layer provides the necessary stability under photoelectrochemical operating conditions while maintaining maximum solar-to-hydrogen efficiency. For the photoelectrochemical characterisation, the photocathode made of GaInP/AlGaAs/Si was connected in a three-electrode configuration with a silver chloride reference electrode, a Pt wire as counter electrode and the photocathode as a working electrode and measured in 1.0 M sulphuric acid as an electrolyte.

The concept of direct solar hydrogen production was successfully demonstrated with this first fabricated photocathode in H2Demo on an electrode area of 1 cm2. The current-voltage curve under 1000 W/m2 AM1.5g illumination shows an electrochemical open-circuit potential of 2.28 V against the reversible hydrogen electrode and a saturation current density of more than 7.5 mA/cm2 (see figure below). Assuming a Faraday efficiency of 100 %, this first experiment would correspond to a solar-to-hydrogen conversion efficiency of 9.2 %. While high efficiencies were not yet the goal of the experiments with this first fabricated photoelectrode, the study conducted shows a successful way to fabricate photoelectrodes and this could be achieved for the first time with a III-V tandem structure deposited directly on silicon.